Healing Community: It Starts At Home 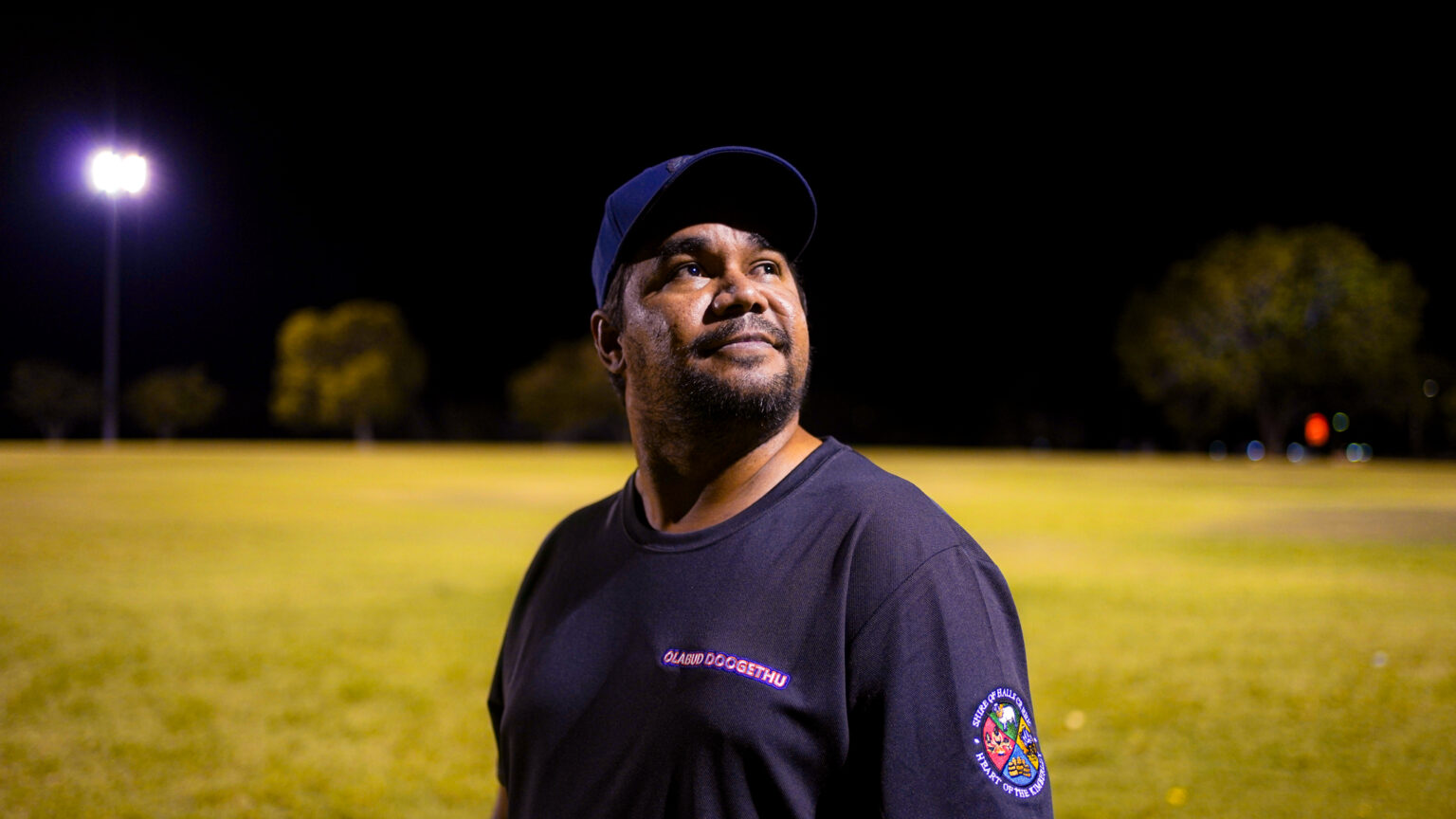 Kevin Hunter Jr is a Jaru and Gooniyandi man and the manager for the Youth Engagement Night Officer program. After seeing kids roam the street night after night, he believes any long-term solution needs to start at home.

Everything happens for a reason

Kevin Hunter Jr, a Jaru and Gooniyandi man, is the YENO Manager for Olabud Doogethu. Kevin was born and raised in the East Kimberley, growing up between Wyndham and Halls Creek, with family ties to nearby Lamboo Station.

“Before I joined Olabud Doogethu, I was actually living in Katherine in the Northern Territory. I was doing work there for Remote Civil, it was a cruisy job. I did roadworks, bitumen, and looking after rest areas on the highways. It was pretty good. There was a lot of travel, Monday to Friday, being in different places, you know.”

But a quick trip back to Halls Creek led Kevin to an unexpected stay that saw him quickly rise through the ranks to lead the team of YENOs.

“It was by accident, really. I brought my Mum back, and then I had a car problem. I couldn’t get back to Katherine, so I kicked back here and had to make some money. I started working for Olabud Doogethu, got a promotion here, then there… It wasn’t my plan come back here for a while because we just moved to Darwin earlier this year. But I think it happened for a reason.”

Working in the YENO team is one of the toughest jobs in town with many in the community often not seeing the hard work and sacrifice from the YENO teams who are all local people.

Patrolling the streets every night from 8pm to 6am is a thankless task and each YENO is motivated to make a difference in their community and to be there for the children when nobody else is.

“There are kids that are five to six years old walking around all night. The big kids are teaching them bad habits at a young age, when they should be role models to them instead… Seeing the kids out at night is very sad – like where are the parents?” said Kevin.

“I like this job because I’m trying to get them off the streets before they end up being broken and into the justice system and going from there. It’s always good to have a chat to them, explain to them that education is important, and that being home is good for them.”

Despite the YENOs best efforts to talk to the kids to go home, many kids in Halls Creek don’t have positive role models and come from broken homes and broken families.

“Well, it begins at home. The kids these days – just seeing and listening to them – they have no food, no bed. All the things that kids should have from loving parents that love them and do things for them – that connection between parents and their children is broken. There’s nothing at home for the kids, so they feel more comfortable out on the street. We’ve seen it ourselves, with parents that drink a lot and have a lot of guests around – I can’t imagine it for the kids trying to live there. Loud music. Violence. And so on beyond that. When we talk to them, they say they’re more safer out on the street than at home until the early hours.” said Kevin.

The YENO program, which is Olabud Doogethu’s flagship program has been running for two years now. It has seen a lot of success in the community, with the latest data from WA Police showing a 63% reduction in burglaries (aged 10-17) and 69% reduction in arrests (aged 10-17) from 2017 to 2020, but this is not often felt by the community who still see regular break-ins and stolen cars.

It starts at home

Breaking the cycle in Halls Creek is a generational challenge brought about by the little yarns and connections sparked by the YENOs. Kevin’s work as a YENO Manager especially hits home, being a father of four young kids himself.

“It hits home. I have four kids and when I finish my night shift, I enjoy every moment with them. I love them up more, I take them out bush, go hunting, and teach them everything. Being a YENO, it makes me want to be a better father, a better role model for my kids and for others. This job has helped me a lot in a way because my connection to who I want to be as a father has gotten stronger. I’ve seen a lot of broken families out there…I feel sorry for these kids,” said Kevin.

A cry for help

After being on the streets most nights in Halls Creek, Kevin believes that the YENOs can do the best job they can. But it’s ultimately up to the parents and families themselves to be there for their kids as a long-term solution.

Until the healing begins at home, Kevin believes that kids will continue causing trouble out at night because it’s their cry for help.

“They’re just looking for attention. It’s back to that caring. The kids are crying for help, so they do these little bad things, these bad habits, to get attention that they never received at home from their own parents.”

“The sad part about it is that you’ve got all these parents, with their chairs out – like they’re watching the cinemas – just parked up on their lawn watching the kids cause trouble at night. They should be encouraging their kids to go home. It shocks me.”

“Parents need to start being parents. They need to sacrifice and put their own fun behind them and start being a parent to their kids. That’s when things will start changing, I think. Kids would stay at home if they do have food, a bed, and a good relationship with their parents. It’s broken because there’s none of that.”

Kevin hopes to see Halls Creek become a positive place to raise families, just like how he remembers it from back in the day.

“I hope it would be a family friendly town again, a little quiet town where everybody looks out for each other. Everybody knows everybody. Everybody’s got each other’s backs.”